Founded in the early twelfth century, the Order of the Temple became one of the most popular groups of the Middle Ages. Its members, the Knights Templar, were military and Christians, and a significant number of legends about them are still alive, including the idea that the knights guard the Holy Grail, the cup which Christ and all his apostles drunk from at the Last Supper. This questioned idea has been the inspiration for novels and movies; and now inspires a magnificent deck: the Bicycle Dark Templar.

Michael Encarnacao and Wayne Grecco are behind Cardicians, a small workshop and design studio. They are not new on playing cards, in fact Michael designed some of the cards made by Elite Playing Cards, and this experience is clearly stated on Dark Templar deck. It is elegant, strong, delicate, intricate and mysterious at the same time. It is full of enigmatic signs as the characters it is inspired by.

The deck will be printed by the USPCC under Bicycle brand, in a limited edition of 5,000 decks. There will be many improvements for the deck, including special seals and metallic inks, when the funding reaches to specific amounts.

You will enjoy the cards in the gallery and, please, visit the project website to get more info and raise your pledge.

If you are one of the first TEN backers that email the creator through Kickstarter saying you have seen this on Max Playing Cards, you will be able to get a deck in the already sold out earlier $10 tier. 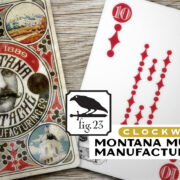 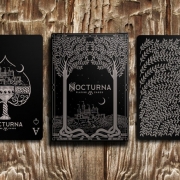 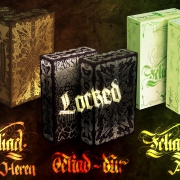 TELIAD Playing Cards. The fantasy world is now a reality 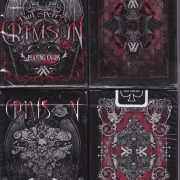 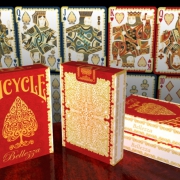